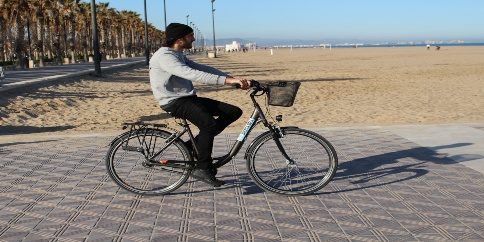 Valencia has tons of bike tours to offer. Be amazed by its nature and its ease roads. Read carefully and choose the option that better suits your holidays. We don’t want to let you down, but It’ll be kind of hard to decide the best rides in the region. Here we go!

The best cycling tours around Valencia

Valencia is definitely a city to explore. The best thing is that it’s a bike-friendly city. It takes part of the “Red de Ciudades por La Bicicleta”, which means that it is one of the main cities in Spain which is totally prepared for bikes.

On one hand, Valencia owns more than 120 km of bicycle lane connecting different neighbourhoods of the city. In addition, it has one of the best spots for cycling, the Turia Park with more than 8 km of length.

On the other hand, the province also has 4 green paths: the Xurra one, which connects Valencia City with Puzol. The Verde de Ojos Negros path, which connects Barracas with Algimia de Alfara. And last but not least, the newest one: Verde de La Safor, the Verde Path from Llíria.

All Valencians have ridden the path of the Fluvial Park of the Turia River. It a 27 km path, which is the perfect route to visit with children due to its tons of playgrounds and picnic tables along the lane.

You can start in Cabecera Park, where you’ll find the old river course and a lane with more than 8 km connecting directly with the path of the Turia’s River Natural Park. The cycling tour lasts around 5 hours and ends up in Villamarchante, or even farther if you want to, ending in Lliria.

The 6 km Verde de Lliria path takes around 45 minutes. It’s a plain and relaxing one, perfect to enjoy with children. It crosses the fields through the town of Camp de Turia.

This cycling tour starts at the old train station and ends up in El Molinet. The lane which goes from Verde path to Lliria is almost all made of concrete.

Most of this cycling tour is surrounded by orange trees and vegetable fields. In El Molinet you’ll find a place to relax, with some picnic tables and bicycle parking.

By taking this path, you’ll enjoy 16.8 km (about one hour and a half) of beautiful landscapes surrounded by Valencian fields. This is one of the most famous lanes in Valencia because of its closeness to an urban nucleus of 1.600.000 inhabitants and its low difficulty.

We recommend you do it from south to east. It’s a path that goes from the countryside of Valencia to Puçol. Be aware of roundabouts and cars, and during the weekends, of people and many other distractions.

Riding around La Albufera will take you about 5 hours. 57 km of rice fields and Albufera Lagoon. It’s a typical and beautiful path all Valencians have done once in a lifetime.

It’s an easy path, perfect for children. You can do it starting in Valencia but in case you go with children is better to start at Albufera, in order to make it short and relaxing for them.